On my journey of becoming more earth/body friendly, I decided to start using all natural deodorant. This decision was backed up by studies that show aluminum-based compounds in antiperspirants may contribute to the development of breast cancer. I don’t need that in my life sssoooooo added bonus! (I mean main bonus, right? HELLO!)

My sister actually began the process ahead of me but I didn’t know until almost two weeks into my… um… let’s call it my DETOX period.

So I did NO research on this, I just stopped using my normal deodorant/antiperspirant. I’m sure you are totally surprised by lack of research. I decided this on the way to work one day and ran to the Walgreens in front of work and started checking out the HUGE selection of all natural deodorants. All two of them, Crystal and Toms. (Actual selection below) 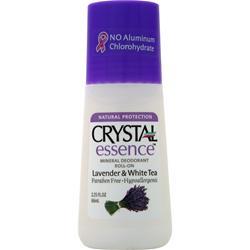 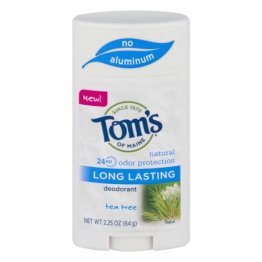 Crystal was about $1.50 cheaper, so which do you think I chose? YUP! Crystal Essence Deodorant that was a lavender and white tea scent, and off I went! This one worked so well that I still have a full bottle of it. After about day three of being super paranoid, apologizing about possibly being smelling, asking people if I was smelly and telling people to make sure they “JUST TELL ME I’M SMELLY IF I’M SMELLY”, I went back to Walgreens and bought Toms in the tea tree scent. I could tell I was a little smelly, but it wasn’t like when you are 11 years old and your mom decides to tell you and EVERYONE else at the Christmas gathering that “Maybe it’s time you start wearing deodorant?” with a look of disgust on her face. This instance leads you to decide to smell under your arms to see what the heck she is talking about, and you almost die from your own grossness. SHOUT OUT MOM!

About a week passed and I decide to call my sister, Beth, who then tells me she is on month 4 of not using the DEATH Deodorant. She was using some other more expensive brand because it’s highly rated and has 1 million reviews to back it up on Amazon. 1 million reviews that she read, took notes on, and has them organized by type, if I want her to send them over.  She is the complete opposite of me when it comes to decision making. Before she jumps off a cliff, she knows EVERYTHING about jumping off the cliff; the height of the cliff, the speed she will reach before reaching the bottom, how she stops the free fall, how she lands peacefully at the bottom, etc.  ME, I’ve jumped and I’m half way down to the hard ground before I realize, “I should totally take up flying lessons.”  Basically, she is one of the smartest humans I know! In this phone call she tells me that the “detox” period or slight smelly time after stopping the DEATH deodorant HAS NOT PASSED YET FOR HER. What the heck am I getting myself into?? I WILL BE FOREVER SMELLY?! But don’t forget… ALIVE.

Around 3 months in, I found a natural deodorant by Arm & Hammer Essentials Fresh Scent. THIS ONE WAS MY FAVORITE and less than $2.00. WINNER, WINNER! I started using this every morning and every now and then, about mid-day, touched up with the Tom’s I had left over in my purse. It’s totally normal to carry deodorant in your purse… 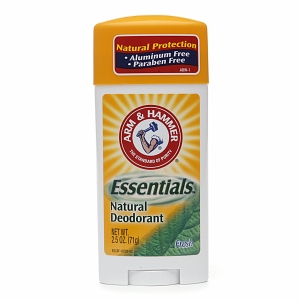 Finally, after eight months, I’M NOT SMELLY and it’s time for phase two; make my own deodorant. Hey, it makes sense to me! After a bit of research, (also known as: one quick Google search of homemade coconut oil deodorant) I was on my way! I LOVE the scent of coconut, so uneducated me went this route. YUM, or so I thought.

Side note – No scent of coconut… Wah. Wah. Wah.

Now for the update on the Coconut Oil Deodorant:

That about sums it up. The first two days it caused my lymph nodes to swell under my arms (the article warned me about that) and the application is a bit messy. It breaks apart when you are applying it, and you kind of have to rub it in.

On the upside, I didn’t smell or sweat like a crazy person as I thought I would. I decided to skip a day to see what would happen too. AND NO SMELLY SWEAT happened. JUST DON’T GO THREE DAYS because… HELLO SMELLY!

My plan is to continue to use this until it runs out and then I will change up the recipe a bit and give it another try.

Here are the ingredients I used: Cocout Oil Deodorant 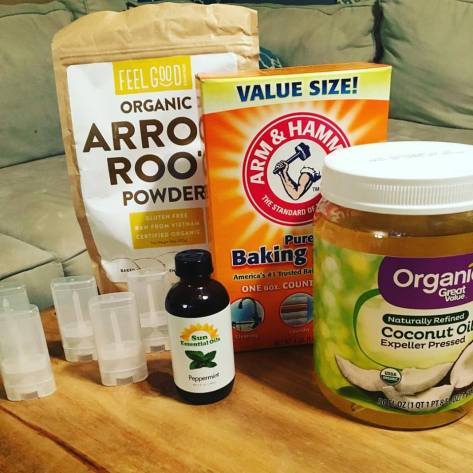 I just mixed all the ingredients up and packed it in the TINY deodorant container and let it sit overnight. I put the rest in a plastic tub and stored it in the refrigerator for later.

So, my revisions are as follows:

I’ll keep you posted on the new set up!

If you are curious where to buy the ingredients or the TINY deodorant containers – AMAZON!

Just know that if you decide to take part in this process of going with all natural products, it takes time. Your body has been conditioned to the products you use now for HOWEVER long you have been using it. For me, that’s around 16-17 years. It takes a minute to get all that out and for your body to get used to the new. GIVE IT A SHOT. And by a shot I don’t mean a weekend… you know who you are! -_-

Can’t wait to hear how your process went!

Thanks for reading, Loveys!

2 thoughts on “I’m A SMELLY CocoNUT…”